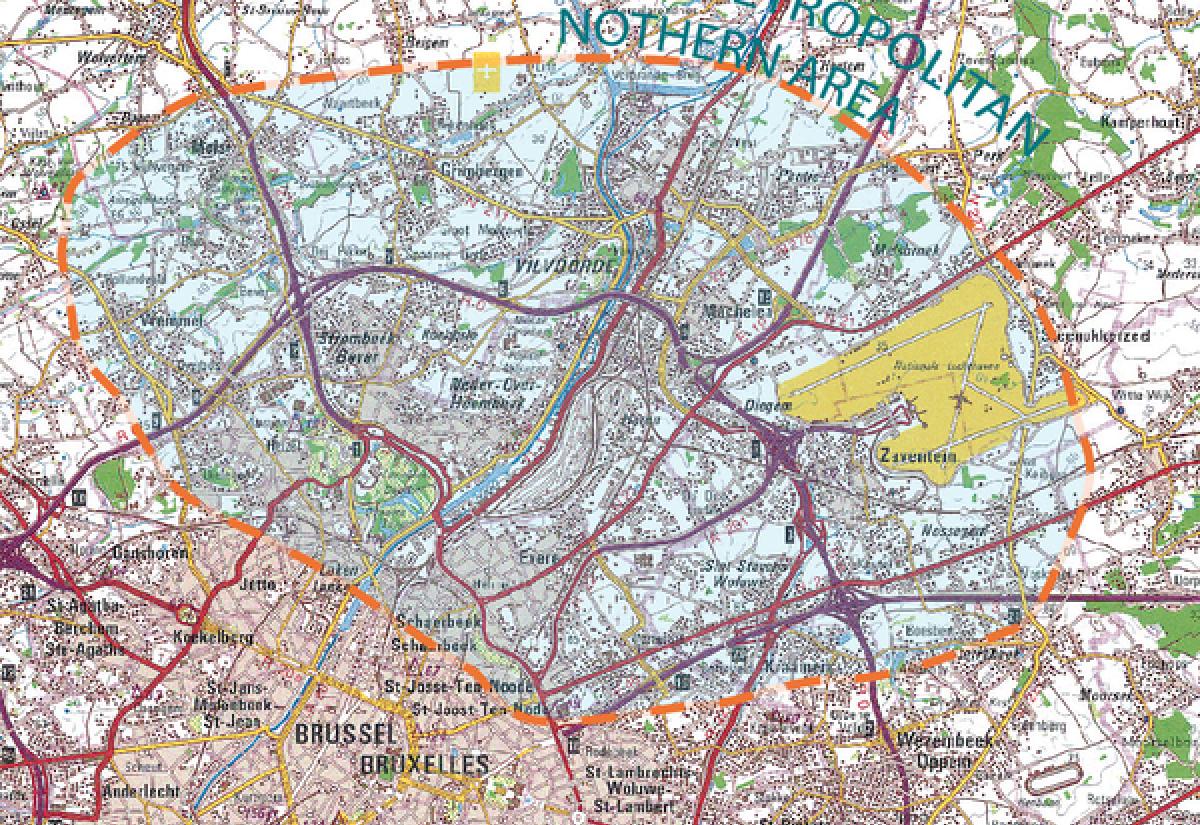 The Brussels-Capital Region cooperates with various Belgian entities on projects and issues of common concern. perspective.brussels is involved in this cooperation in the fields of statistics, territorial planning and school infrastructures.

Since Belgium is a Federal State, the Regions have a great deal of autonomy in managing their own competences such as territorial planning. They are called upon to cooperate with each other and with the Federal Sate to manage matters of common interest.

The Brussels Region cooperates with the Walloon Region and the Flemish Region on certain areas or inter-regional projects, such as for example the redevelopment of the former NATO site. And it does so, even though in Belgium, there is as yet no structural metropolitan cooperation as is the case in other countries.

Cooperation with the Belgian statistics system

Within the framework of its expert mission, the BISA conducts many projects with its Federal, Walloon and Flemish counterparts in order to produce joint statistics and analyses on Belgium, such as the annual publication of the Regional Economic Outlook. The BISA also contributes to several working groups beyond the regional borders, such as the Observatory of Cultural Policies in the Wallonia-Brussels Federation or the Labour Accounts working group of the FPS Employment, Labour and Social Dialogue.

Since 2012, the Inter-regional Forum of information on territorial planning has brought together the administrations of the three Belgian regions to facilitate the exchange of information on planning policies and tools and discuss common issues. It has also been used to finance joint studies such as the Metropolitan Landscapes study.

The Wallonia-Brussels Federation, the Flemish Community and the Brussels-Capital Region have adopted investment plans to create new places in Brussels’ schools.

Within perspective.brussels, the School Service assesses the requirements in terms of creating places in the education system in the Brussels Region and facilitates the completion of projects with a view to increasing the school offering. In this respect, it works with the administrations of the Wallonia-Brussels Federation, the French Community Commission (COCOF), the Flemish Community and the Flemish Community Commission (VGC).

This programme targets the joint territorial development of the northern periphery of Brussels (Noordrand), between the north of the Brussels Region and parties from the municipalities of Machelen, Vilvoorde, Zaventem and Grimbergen. It is structured around five specific projects: the conversion of the former NATO site, Boulevard Européen, the Green Network, Transit Oriented Development and Buda+. 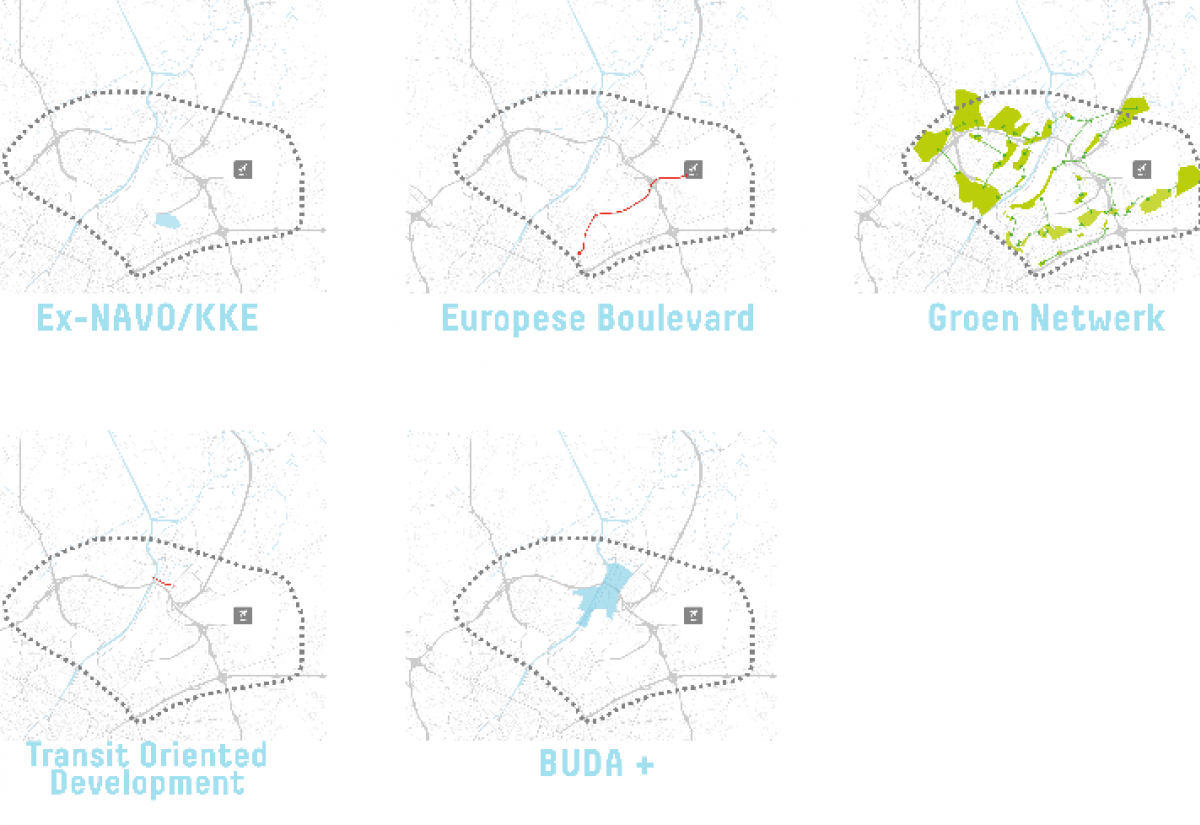 The Metropolitan Landscapes study is a joint initiative by perspective.brussels, Omgeving Vlaanderen, Brussels Environment, the Vlaamse Landmaatschappij (the Flemish Land Agency), the Agentschap voor Natuur en Bos (the Flemish Agency for Nature and Forests), the Chief Architect for the Brussels Region and the Flemish Chief Architect.

It has been co-financed by the Brussels and Flemish Region and launched within the framework of the Inter-regional Forum of information on territorial planning.

The results of this research were collated in a book which was presented at a symposium on 28 January 2016.

perspective.brussels is involved in the work of the SPIMA project (Spatial Dynamics and Strategic Planning in Metropolitan Areas), financed by the European planning programme, ESPON (European Spatial Planning Observation Network). This project studied the tools and approaches implemented by 10 European metropolitan areas including the Brussels-Capital Region to manage spatial development at metropolitan level. It puts forward a methodology to improve the planning and governance of functional urban areas along with recommendations for the Brussels metropolitan area.

The results of the research were presented at a European workshop on 24 October 2018 and at an inter-regional workshop organised by perspective.brussels on 2 April 2019. This inter-regional workshop of experts enabled the three Belgian regions to discuss the subject of functional urban areas, governance and the planning challenges in the Brussels metropolitan area. It was the first in a series of three events to be held in 2019 and 2020 to present the results of studies from the European ESPON programme.

Three multidisciplinary teams were entrusted with the task of reflecting on a possible future for the Brussels metropolitan area, following an international competition.

The result: three different visions that fed the debate in the context of the draft Regional Sustainable Development Plan.

Twentieth century urbanisation in and around Brussels

The Brussels-Capital Region (perspective.brussels and BMA), in partnership with the Flemish Region (Departement Omgeving and Team Vlaams Bouwmeester), has launched analytical and prospective research with a view to the qualitative transformation of the 20th century built fabric. This periphery is located in and around the Brussels Region. An atlas describing the spatial functioning of the 20th century periphery in and around Brussels is now available.

OPEN Brussels, a network of open spaces in and around Brussels

An inter-regional study aims to prepare a landscape and ecological vision common to the different regions within the periphery, thanks to which the open spaces will be able to play a structural role in sustainable urban development.

This study is coordinated by perspective.brussels, the Departement Omgeving Vlaanderen, Brussels Environment, the ‘Natuur en Bos’ Agency and the Public Waste Agency of Flanders (OVAM), in partnership with the Vlaams Bouwmeester and the Bouwmeester maître architecte, Flanders Environment Agency (VMM), the Flemish Land Agency (VLM) and the ‘Landbouw en Visserij’ Department.

Perspective.brussels is a member of the Flemish association for space and planning, VRP. It also takes part in the activities of the FUP (For Urban Passion), an organisation created by the CUB (Chamber of Urban Planners of Belgium) to encourage exchanges and discussions in Wallonia and Brussels about territorial planning.